The client had become aware of the increasing number of maintenance call outs to repair windows in three high rise blocks in recent years and had had particular difficulty finding replacement hardware parts.

With the windows having been installed for over 20 years many of the parts had become obsolete as technical advancements in the window industry had developed.

They were already planning to do work to the lifts, heating system and communal areas on the blocks so it was a good opportunity for them to investigate the options for the windows at the same time.

We were aware of a very similar scheme which had been undertaken in pretty much the same circumstances at Gentoo in Sunderland and so we visited their site to see what had been done and to see the positive impacts on their blocks and on their residents.

The cost of replacing the windows for a second time would have been prohibitive, added to which was the potential damage to the external insulation system, disturbance to residents and the negative environmental impact.

Our residents are always supportive of what we try to do and understand that we try to offer them the best solutions; after meeting with Mila Window and Door Maintenance and talking to our residents, and following a full assessment of all the options available to us it was clear that a ‘refurbishment scheme’ rather than another replacement of the windows was a viable and very attractive proposition.

Going down the refurbishment route rather than replacing the windows is clearly a fantastic outcome for Ongo and its residents; the feedback about the completed works and in respect of Mila Window and Door Maintenance’s ability to carry out the job has been excellent.

The site achieved outstanding resident feedback. Particular emphasis was placed by the residents on the following:

Nature Of The Works

Mila Window and Door Maintenance were engaged to refurbish 1444 Tilt and Turn opening sashes on windows which had originally been installed during the 1990s as a part of an overall refurbishment programme which included the installation of external wall insulation (EWI) and to replace 1900 sealed units.

Savings secured of over 40% on a like for like comparison if blocks had been scaffolded to replace the windows rather than refurbish them.

What the client said

We had become aware of the increasing number of maintenance call outs to the blocks with regards to windows in recent years and had particular difficulty finding replacement hardware parts. With the windows having been installed for over 20 years many of the parts had become obsolete as technical advancements in the window industry developed.

We rent houses and flats across North Lincolnshire and help people in their homes, with things like repairs and improvements, or money and lifestyle advice.

United Living is one of the UK’s leading providers of refurbished and new build living solutions. With almost 110 years of experience.

The feedback about the completed works and in respect of Mila Window and Door Maintenance’s ability to carry out the job has been excellent. 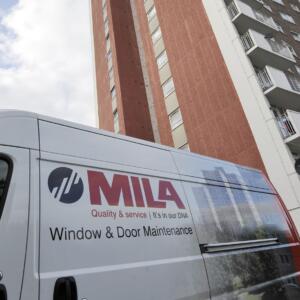 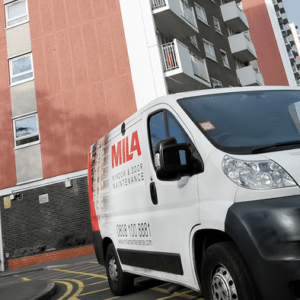 Mila Window and Door Maintenance regenerated 294 windows in a 16 storey block of flats in Hastings converting them from an ‘old-fashioned’ Pivot style window to a newer and easier to use Tilt and Turn style.

Mila Maintenance  @milamaintenance
It’s not long until @FDSafetyWeek now, which starts on the 20th September. The aim of this campaign is to raise awa… https://t.co/rMeiXc4hzr
reply retweet favorite
Follow us on twitter